You are using an out of date browser. It may not display this or other websites correctly.
You should upgrade or use an alternative browser.
This October marks 10 years of Euro Truck Simulator 2 goodness, with tomorrow, October 18th, being the actual day in history we announced the release, right here on the blog. Wow, time flies when you are having fun! So starting tomorrow, to celebrate this anniversary together with the community, we have come up with an idea for a small World of Trucks event - 10 Years of ETS2!

...but first, we’d like to share with you some history on the game that we all love to play and work on.

Euro Truck Simulator 2 hails from a different era of the games industry, a time when PC games were mostly released in a box onto retail shelves. Our initial retail release of ETS2 took place during the autumn of 2012. Its incredible success, during the first few days of release, was totally unexpected for us. And, as we watched the game hit the number 1 best-selling spot in the charts in Germany, the UK, Poland, and France, little did we know the game would become such a phenomenon. 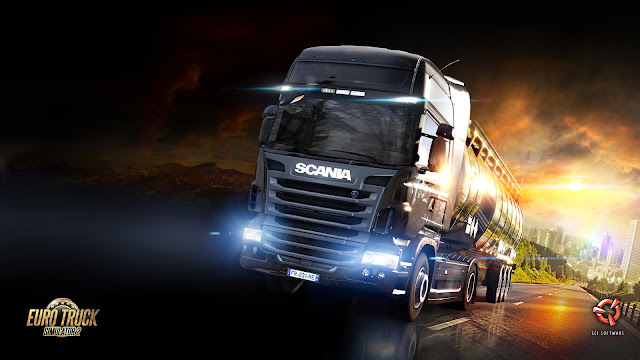 Then the opportunities of digital distribution really opened up for developers, and ETS2 premiered on Steam a couple of months later, January 16, 2013, to be precise. This proved to be even more crazy for us, when it also earned the title of best selling game on Steam, for the third week of the year. Suddenly, a small truck simulation game in a niche genre made it big in the eyes of the gaming press and global player community

Today, the huge player base and community, our #BestCommunityEver, is a fantastic inspiration for us to continue the journey forward, expanding our truck simulator universe and evolving the fidelity of our games. Euro Truck Simulator 2 has proven to be a success story beyond our dreams, having sold over 13 million copies during its first 10 years, and Steam reporting over 80 million DLCs purchased, from small cosmetic packs like paint jobs to major world expansions.

We could hardly ask for more. Still, we do hope that Euro Truck Simulator 2 has at least another decade of further growth in front of it - there are so many features will still want to implement, and so much new stuff we plan to bring you, so back to the celebration!

Participation in this event is very simple, in fact, just a single delivery will do the trick. And for joining us in this small task, we’d be proud to offer a very special, one-of-a-kind reward that we’ve had crafted here, by the team, especially for you.

Using External Contracts or External Market, with a World of Trucks-connected profile in Euro Truck Simulator 2, the player's personal goal is to deliver any cargo from any city.
Reward

Personal: Players that deliver any cargo from any city will gain a personal World of Trucks Achievement and an impressive ETS2, 10th Anniversary, truck and trailer paint job as Steam inventory items. 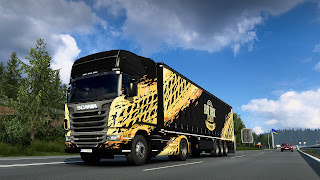 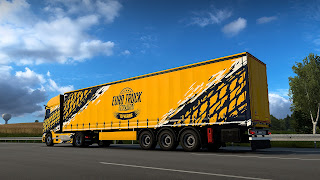 We would be incredibly honoured to see the fans with their rigs wearing this specially crafted truck and trailer reward paint job, using our hashtag #10YearsETS2. And, to share the happy moments back with you, we are going to do a big celebration live stream on our Twitch channel with our CEO, Pavel Šebor, where we will be giving away game keys and merchandise to our #BestCommunityEver. 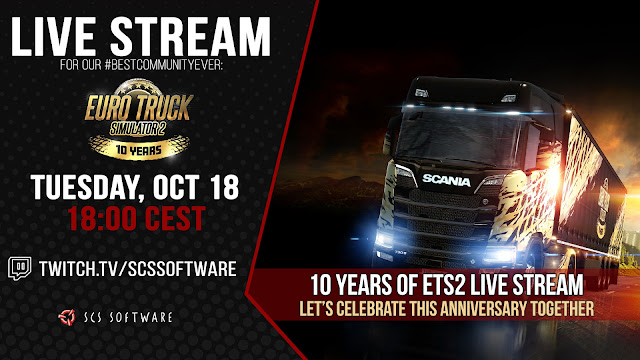 ​
We also have two very special gifts provided by our friends over at Thrustmaster; two Limited Edition 'Euro Truck Simulator 2' branded T248 wheels! One of these wheels will be given away during our special live-stream, and the other will be given to one lucky selected player chosen by our teams on our social media pages who uses the special anniversary hashtag #10YearsETS2. 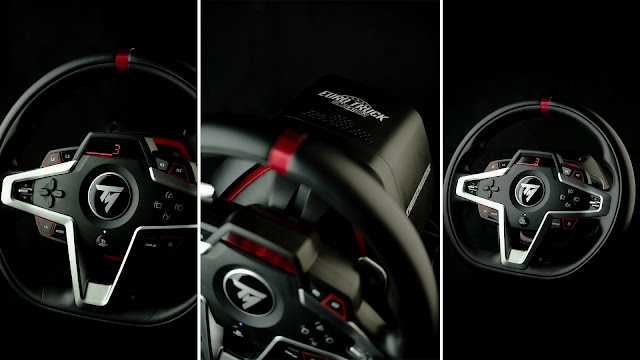 We encourage you to use this hashtag to share your journeys with the special paint job and your best memories of Euro Truck Simulator 2! We really look forward to reading your stories and seeing your pictures and videos on our Facebook, Twitter, and Instagram profiles

We hope you can join us in celebrating this momentous occasion! We can't wait to keep on trucking with you for many more years to come.